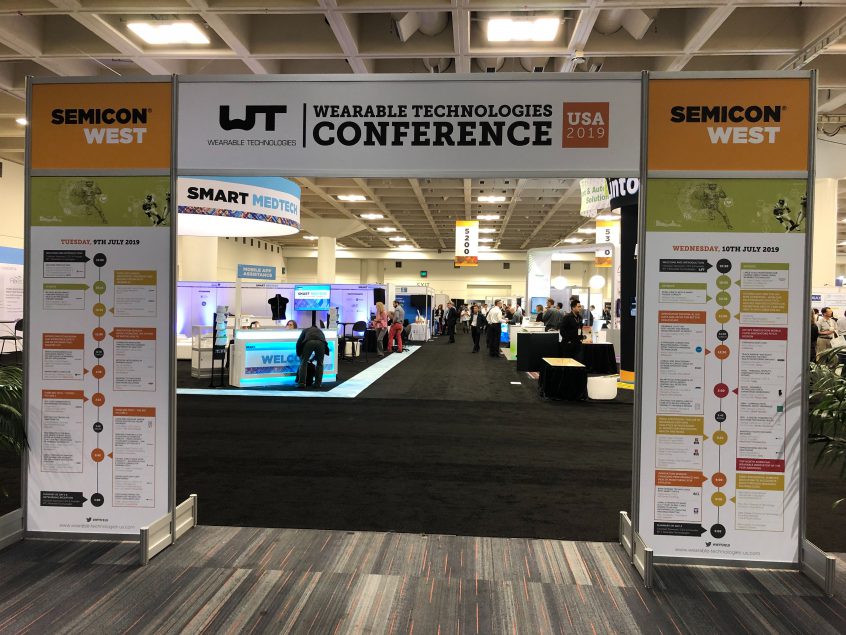 This year, Greenlight Insights attended the 34th Wearable Technologies Conference held on July 9-10 in San Francisco, CA. Many leaders in the wearable technologies industry gathered to demonstrate breakthrough innovations for the wearables ecosystem, as well as research and thought-leadership for the audience of electronics manufacturers, application developers, and healthcare professionals.

Virtual reality and augmented reality were one of the themes highlighted in the program, along with AI, sensor tech, connectivity, energy solutions, and smart products. Among the exhibits, digital health solutions, smartwatches, and smart clothing were the most common products, along with enabling technologies such as micro-batteries, circuits, and sensors.

Of the 18 companies exhibiting during Wearable Technologies Conference, a few AR/VR-focused companies stood out:

Orbispace was created to service communities globally however, it is a challenge for the company, as there are constraints with bandwidth, infrastructure, and environments, which in turn affects the scalability of services for individuals in regional and rural communities. The infrastructure required for connectivity is mostly not deployed to rural areas, which impacts Orbispace’s delivery of service to all communities. In the meantime, Orbispace has made a point to say that they are becoming more involved in policy, to improve efforts of inclusion. Should the necessary technology be deployed in remote areas, telehealth could become available to those in areas where hospitals are not in close proximity.

The global smart wearables market is estimated to be valued at $25 billion in 2019. Greenlight Insights estimates that augmented reality wearables represent a $600 million market opportunity at present.

After interviewing vendors during Wearable Technologies Conference, several enabling technology companies agreed that the AR/VR market is still in its infancy. The vendors we spoke to all expect future demand for products and solutions at the intersection of AR/VR and wearables. However, they were quick to mention that the market is not yet ready. It was their collective prediction that augmented reality technologies in the wearable technology sector may not be seen at scale until five years from now. But, one of the first may be smartglasses, which is poised to develop into a major wearables category as they are becoming more commonplace to the consumer market.