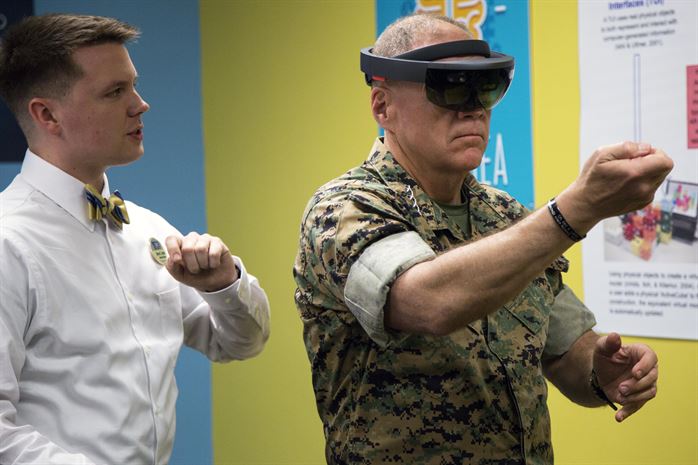 A consumer deciding between a Magic Leap One or a Microsoft Hololens has a difficult and multifaceted choice to make; the two leading augmented reality HMDs currently on the market both use cutting-edge integrated hardware and software design to overlay graphics and digital assets onto physical environments. Both are highly advanced, and as a result can be prohibitively expensive for the average consumer; this makes them better positioned for usage by professionals in the design, manufacturing, and healthcare industries, among many others

However, the recent awarding of a $480 (32h 0m) (32h 0m) (32h 0m) million contract to Microsoft from the US Army represents a major milestone for the maturation of xR technologies. The previous major investment sending waves throughout the enterprise xR industry, Walmart's national rollout of its VR training program, resulted in a deal potentially worth 2.7 million, at conservative estimates. In the context of the Hololens agreement, Walmart's investment represents about half a percent of the Army's expected expenditure over the next few years (the contract stipulates delivery of 2500 units before the end of 2021).

The Army's Contracting Command has not explicitly stated why the Hololens was the preferred device to power the upcoming Integrated Visual Augmentation System (IVAS) over the contract's other major bidder, spatial computing magnate Magic Leap. However,  guesses can be ventured from each products' respective hardware, software, and overall value propositions.

Firstly, and perhaps most crucially, the devices themselves speak to different user behaviors, with Hololens' entirely self-contained design emphasizing total freedom of movement more than the occasionally awkward semi-tethered design of the Magic Leap One. The ML1's Lightpack tether also precludes, or at the very least problematizes, the addition of an external worn power source. This is important given that both devices will need to address the issue of long-term field usage, and neither offers more than 3 hours of autonomy. In addition, the diffractive waveguide technology powering the displays of both HMDs is used to varying effect; ML1 offers a slightly wider FOV, but by many accounts lacks sharpness and definition compared to Hololens.

In terms of software, Microsoft holds a major advantage of Magic Leap in that it has invested significant time and resources into the implementation of its Universal Widows Platform (UWP) API across several different Microsoft products, enabling smoother transition of data, applications, and tasks between traditional computers and the Hololens, all running on Windows 10. In this respect, the barriers to entry for software development, maintenance, and general onboarding are significantly reduced for Hololens over Magic Leap, which has taken on the task of creating a custom operating system and runtime which they believe best suits the particular spatial computing tasks intended to run on ML1. Incidentally, ML1's own content ecosystem is currently dominated by entertainment-focused applications, with only a handful of major enterprise apps emerging at the company's inaugural developer conference this last fall. Conversely, the Hololens has had a number of years to build up a robust content library and developer community populated mostly by enterprise stakeholders, who represent the relatively narrow group who can afford to own an AR HMD in the first place.

By its own admission, Microsoft has been a collaborator of the armed forces for four decades. In this time, it has played a major role in shaping computing and IT practices throughout. Recently, Microsoft made a bid made on a lucrative DoD contract known as JEDI (which was famously turned down by Google over ethical AI concerns), which would place a disproportionate majority of top-secret data and high-level AI and cloud computing operations into Microsoft's control. If Microsoft were to be awarded the JEDI contract, then the integration of such a major IT touchpoint as the IVAS system being done by a company other than Microsoft, then, makes little sense on the surface. This is especially true in the wake of confirmed news of a Hololens successor, to be powered by a more powerful iteration of the special holographic coprocessor found in the current device, alongside the latest Snpadragon SoC from Qualcomm.

It remains to be seen whether Magic Leap will find breakaway success in enterprise spaces, but for the moment it is clear that cutting-edge technology needs a strong ecosystem to support it.