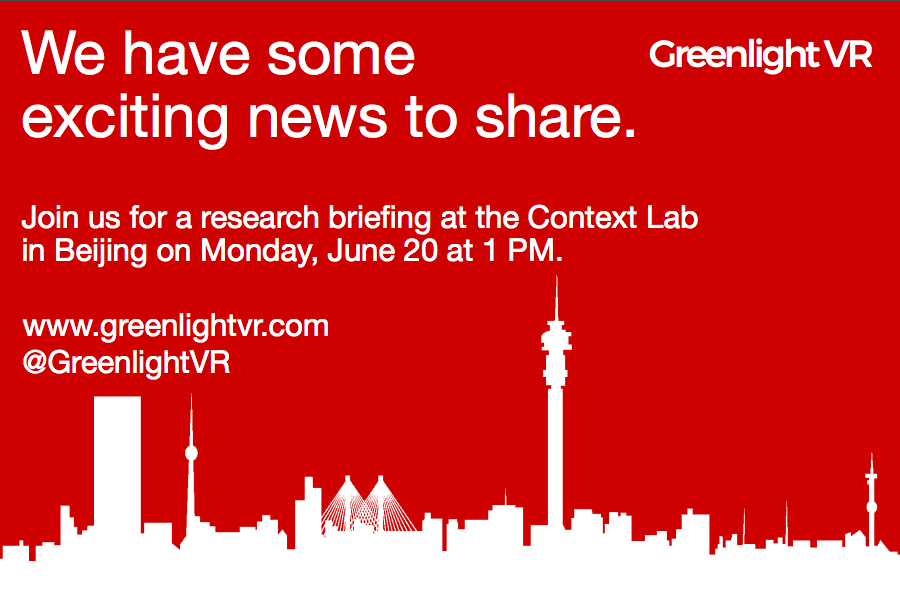 Greenlight VR hosted a special research briefing for invited guests in Beijing, China, featuring cross-border insights and strategies for corporate executives, investors, and entrepreneurs.
The event showcased Greenlight VR’s findings from the 2016 Virtual Reality Consumer Adoption Report, which was released early this week. Eddie Lou, Managing Director of Greenlight VR’s Beijing office, lead a panel that discussed the VR industry between the U.S. and China markets. The panel featured executives from Baofeng, VRision, and uSens. Key themes from the panel were:

What are the drivers of China’s VR/AR market development?

Analysts expect the market for virtual reality in China to grow to $8.5 billion by 2020, benefiting largely by the $1.1 billion global VR spending spree, fueled in part by Chinese tech giants Alibaba, Tencent, and Wanda Group. With a population of more than one billion people, macro-economic forces driving technological change, and the “accelerated” expectations of Chinese investor, China is possibly VR's brightest and largest market opportunity.

How are the American and Chinese markets different?

Lou, who previously worked as a research analyst with iResearch, explained for the attendees that business models in China and US developed differently in the present mobile-internet era. “For VR, there will be no exception to this rule.” For example, Lou said for the cinematic arts industry, many creatives in Hollywood into VR to create cinematic virtual reality experiences. Lou notes that there are fewer VR content producers in China because the Chinese film industry is spending most of its time making money on films, not enough exploring new mediums.

Peter Aihui Dong of VRision said animated VR film is not necessarily superior in terms of VR experiences, consumers in China would prefer live action quality contents. Consumers care less about the nuance of technology in relation to the stories being told. The stories will attract the consumers over the new technology experience.

How is the VR industry affecting the Chinese market?

There has not been a lot of collaborations between the Chinese film and gaming industries but people have started to work together with the emergence of VR. These industries have begun to team up to combine their own unique sets of skills.

Cui Haiqing of Baofeng said big tech and mobile game companies in China are now incubating VR projects internally with money investments, dedicated teams, and corporate resources. The companies plan to wait for the market to mature and then start hitting the market hard.

Greenlight VR will also be holding an research briefing in San Francisco on June 22. Email events@greenlightvr.com to request an invitation.