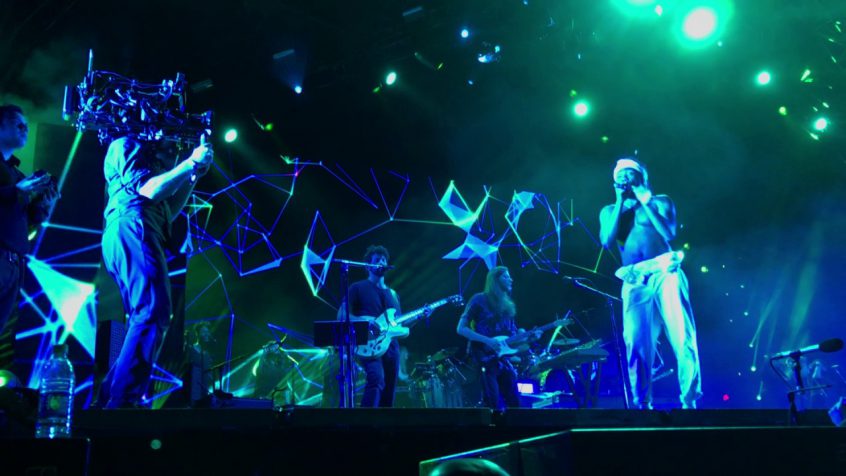 With the growing influence of the experience economy, entertainment is evolving, and looking to compel audiences to leave their homes and endless content-on-demand and purchase a ticket for premium entertainment. The music industry has been navigating this new challenge for years now, by expanding audience sizes through online streaming, and even experimenting with the use of 360-degree video recordings and VR live events.

These developments from events promoters such as Live Nation catered to the in-home audience, while performers, stage designers, and show producers focused on evolving the concert experience. This resulted in the rise of expansive stage design with an artistic flair, leaving the traditional band, lights, and video display in the dust. Instead, focus shifted to the expression of the artist and interpretation of the music, blending an art show and music performance together.

Holograms were another way the music industry was trying to cater to bringing back the audience to live events, becoming a widespread use for late music stars like Tupac, Michael Jackson, and recently Whitney Houston. Living artists are using holograms as well for various reasons, like Chief Keef who performed via hologram to avoid outstanding warrants.

Digital Domain was behind the first hologram, creating a hologram of Tupac for a Coachella performance in 2012. Although the company has drastically changed emerging from financial troubles in 2012, the visual effects studio is still working hard on creating digital humans, albeit using a different method.

Beyond creating some of Hollywood's best visual effects, Digital Domain is working on real-time capture and creation of humans, which now powers the like of Thanos through Josh Brolin's performance, capturing the actor's emotions and translating them to a CGI character.

These advancements in digital humans could lead to incredibly detailed holograms or effects that reach the biggest stages for music and live events. It will be easier for event producers to replicate and animate some of the world's most beloved musical artists and performers, or larger than life effects to live acts.

Current artists like Childish Gambino, Billy Eilish, and Elton John all create unbelievable shows, expanding the experience beyond the music, adding visual elements for a fully immersive experience. Performers will be able to pair real-time animation and hologram projections to create visual effects powered by the performers themselves. Currently, the motion capture rigs may discourage artists from this route as the rigs are large, uncomfortable, and take significant time to set up, but capture technology through software is quickly advancing.

Today, artists can look to augmented reality as an outlet to digitalize their shows, and in some cases, they already have. Coachella added mobile AR effects to the 2019 festival and Childish Gambino released a mobile AR app for fans to experience his music in a new way.

This will all become more accessible with the use of Web AR, launching an experience from a smartphone camera to a web browser rather than downloading and launching an app, but currently, Web AR has its limits. With the continued development of 5G, performers could deploy more reliable and larger scale AR experiences for their shows through Web AR.

But, mobile AR effects are only the beginning. With the beginning of consumer adoption of AR smartglasses years away, performers may be a decade away from completely relying on augmented reality to accomplish visual effects at their shows.

The music industry is on the cusp of a digital revolution as it evolves, and event promoters and producers should expect a rise in visual effects at concerts, adapting to performer demand for bigger and better experiences for their audiences.