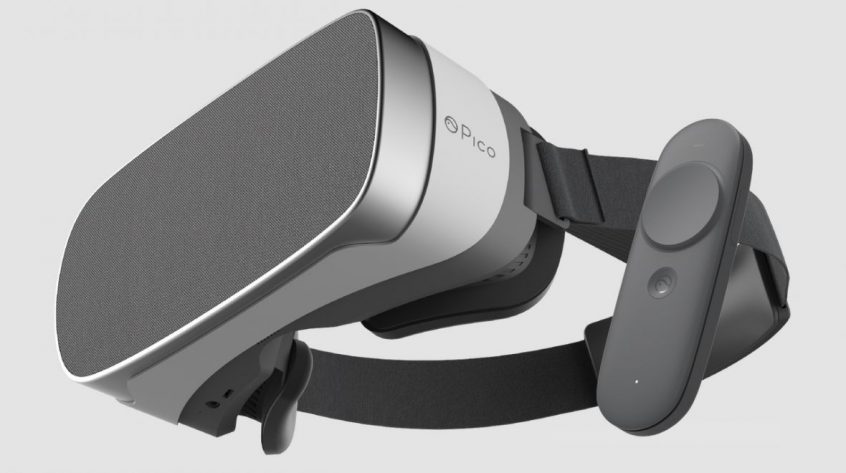 With all the E3 VR focus on PSVR and Bethesda, Pico Interactive's newest headset, the Pico Goblin, may not have gotten the attention it deserved.

At first glance, the Pico Goblin looks like a Google Daydream. Its color and shape are similar and it sports a little remote controller. Closer examination reveals two differences, one much larger than the other. First, the Pico headset is not made from cloth. Second, no phone is needed. In short, the Pico Goblin is nothing like Google Daydream, because it is the first commercial all-in-one VR headset.

All-in-ones are seen by many as the pinnacle of VR HMD technology. It is by far the simplest platform. No PC, console, or phone is needed. This means that every headset is untethered, allowing for maximum mobility. The user simply puts the headset on and enters Pico's storefront (built by Scalefast).

The Pico Goblin itself was built using Qualcomm's Snapdragon reference design and the Snapdragon 835 developer kit. Like the Samsung Gear and Google Daydream/Cardboard, it uses Android software. This means that developers will be able to easily port titles onto the Goblin - helpful for Pico's plan to compete. The Pico Goblin began development on the Qualcomm Snapdragon 820 DK.

The company's largest strength, however, is its price tag. The Pico Goblin is launching at $269 USD, with attendees at E3 receiving a pre-order discount. This places this headset in the $200 to $399 price range. Greenlight Insights' research indicates that this the ideal price point for just over 22% of U.S. consumers.

While this price initially appears higher than mobile-based headsets, it goes down dramatically when the cost of the phone is factored in. The Samsung Gear VR, for example, is $99 for the headset - and at least $599 for the Samsung Galaxy S8. Still, consumers find value in smartphones, as evidenced by the fact that the smartphone market ships over one billion units globally per year.

Pico is betting that users are willing to spend less than $300 on a dedicated VR headset and our research suggests that they are right. The fact that the headset is designed with Qualcomm tech to take advantage of an Android platform is a huge plus for Pico. It will enable developers to create content easily, which is a necessity for new players entering the market.

The Pico Goblin is currently the only all-in-one HMD on the market, but this will not remain true for long. Google and HTC have announced a standalone Vive/Daydream headset that will release before 2018. That said, Google and HTC's device is not at the stage that Pico's is. The company may make some headway into the market by virtue of being the first one released. Its largest challenge will remain its name recognition - many consumers have not heard of HTC or Oculus, let alone Pico.

The Pico Goblin is available for pre-order now. Orders are expected to ship within six to eight weeks. The Pico Goblin lacks 6DoF and room-scale tracking, drawbacks that may reduce its appeal.

Subscribers can look forward to a full review of E3 2017 and how it related to virtual reality and augmented reality technologies. To view the full report, becoming a client today.