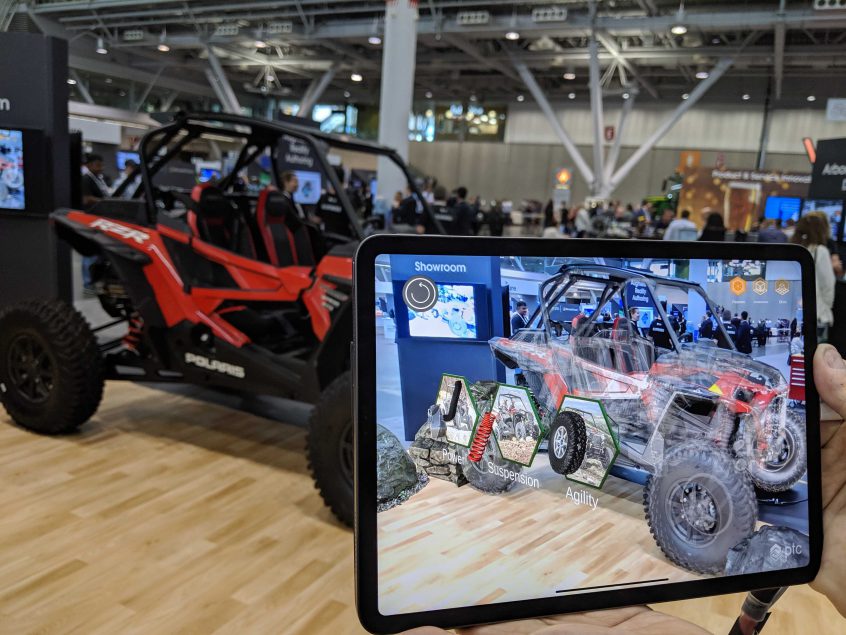 In 2019, the market for cutting-edge immersive technology was driven significantly by adoption from business clients. High-end hardware and software from companies like Varjo and PTC offered compelling evidence for the usability and revenue-generating potential of enterprise xR deployment.

In 2020, Greenlight Insights expects to see significant disruption in enterprise xR from the following emerging technologies:

The intrinsic nature of VR is that direct bodily interaction is the most comfortable and naturalistic form of interacting with the vast majority of experiences. This is exemplified by the fact that the main function of current controllers and interfaces is to track and replicate the movements of a user’s body. This can be thought of as the basis of embodied computing.

Contrary to other more traditional computing modalities, virtual and augmented reality technologies have relatively little time to organically uncover best practices for user interface and interaction. Enterprise xR providers such as VRGineers and Microsoft in 2019 pioneered the usage of embodied computing modalities via features such as eye and hand tracking.

2020 will see significantly increased investment into similar technologies. Enterprises are expected to embrace techniques such as neural impulse control, which will decrease xR’s reliance on traditional control interfaces inspired by 2D computing. While these have universal appeal, enterprise clients have more immediate and actionable demand for such technologies as an increasing number of current use cases are driven in part by a need for increased workplace safety and improved regulatory compliance. Regulations often require workers to be able to operate technology hands-free and remain focused on complex hands-on tasks or potentially hazardous environments.

Mapping real-world environments on a large, city-sized scale have become an important target for companies in the AR cloud space. Startups such as Blue Origin and 6D.AI, as well as major AR stakeholders like Google, made significant strides in 2019 by developing SDKs and computer vision algorithms that form a critical infrastructure for AR cloud systems. This will also create major opportunities for ancillary technologies such as autonomous driving and visual positioning systems.

Mapping spaces for enterprise xR navigation or telepresence has already been explored by startups such as Matteport and Insider Navigation, but expanding to outdoor and public spaces will increase opportunities for clients operating in larger environments, such as in architecture and construction, or civic engineering. 2020 will see more startups attempt to lay claim to an increasingly promising sector, as well as further investment from major technology companies like Microsoft and Google.

5G is a crucial component in next-gen smart infrastructure and computing modalities, of which xR will be just one part. Applications such as robotics, IoT/ IoP, smart cities, and traditional media and entertainment are all set to experience a major disruption driven by newly available data transfer and intercommunication modalities. The timelines for widespread consumer availability of 5G networks are still long, however, the transformative potential has driven the telecommunications industry to accelerate development. At the same time, providers are working to drive demand through aggressive marketing. Stakeholders must identify that 5G is in an evolutionary phase that could last 5-10 years and maintain realistic expectations for the technology.

2020 will see meaningful activation of 5G AR deployments in laggard regions such as the continental United States, but native 5G-ready hardware such as handsets and HMDs will remain relatively sparse as value propositions for average consumers surrounding 5G have yet to coalesce.

Issues such as focal rivalry between real and computer-generated objects, and the decoupling of the natural vergence and accommodation responses for virtual objects rendered at various distances, prevent users from having meaningful interactions in AR environments. By not engaging our natural visual cues, we are limiting users’ ability to accurately gauge distance and interact with any degree of precision with nearby computer-generated assets or interfaces, focal rivalry, and vergence-accommodation conflict (VAC) represent a critical threshold for quality in Optical See-Through (OST)  AR HMDs, and once solved will enable significantly faster adoption of AR across virtually all usage scenarios.

Greenlight Insights expects significant research from major hardware providers such as Oculus, as well as optics specialists such as Adlens, to result in significant gains in resolution and focus into 2020 and 2021.

The close relationship between AR and the mobile computing ecosystem created ideal conditions for camera-based passthrough AR to thrive in 2019. While companies such as Facebook and Snapchat have explicitly stated an intent to improve their AR offerings in the near future, other companies are pushing beyond the smartphone to deploy passthrough AR in the form of virtual mirrors.

Retailers such as Sephora began launching virtual mirrors alongside startups like Modiface as early as 2014, and the relative simplicity and scalability of fixed passthrough AR-capable hardware (especially when compared to headworn displays), has driven further interest in the technology. E-commerce giants such as JD.com have leveraged existing relationships with fashion and beauty retailers to launch mass-market virtual mirrors in stores as well as in apps. In 2020, barriers to entry for retailers will be at an all-time low, and modular virtual mirror installations from companies such as HeroMirror may bring much-needed appeal and novelty to brick-and-mortar retail experiences.