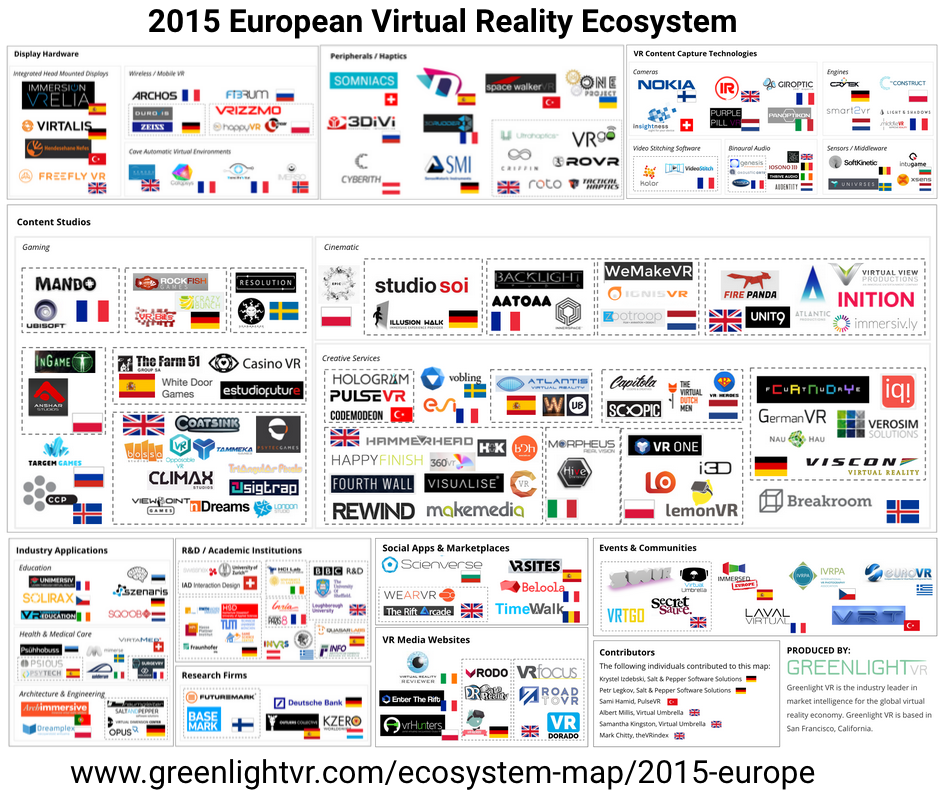 SAN FRANCISCO, CA, October 1, 2015 – Today we're unveiling our 2015 EUROPEAN VIRTUAL REALITY ECOSYSTEM MAP, a comprehensive and easy-to-read way to identify some of the largest and most influential virtual reality companies headquartered in Europe. The Map organizes over 150 companies from more than 20 European countries into 18 virtual reality product categories.

While the mainstream media has largely focused on U.S.-headquartered companies, Europe has a long history and fair share of innovation in this industry. In fact, Europe has grown to be a hub of home-grown virtual reality companies, with prominent device manufacturers, game studios, media outlets, and conferences in nearly every European nation.

The 2015 EUROPEAN VIRTUAL REALITY ECOSYSTEM MAP is a first-of-its-kind graphical compilation of VR companies operating in Europe.  The key takeaway from our research, which will be detailed in the upcoming 2016 Europe Market Study, is that it’s possible to build prominent VR companies regardless of proximity to Silicon Valley -- particularly as more development kits and software creation tools are becoming accessible to the wider audience of technologists. The rate at which the virtual reality industry is expanding is truly remarkable.

To learn more about the European VR industry, order the 2016 European Market Study.

We would like to thank of our all partners for their collaboration on this project, especially Sami Hamid, Mark Chitty, Petr Legkov, Samantha Kingston, Krzysztof Izdebski, and Albert Millis.

Through a suite of products that include research reports, market data, events and client consulting, Greenlight VR analyzes the financial, social and technology trends affecting the virtual reality industry.

Greenlight VR is a privately-held company based in San Francisco, California. For more information, visit www.greenlightvr.com and follow @inGreenlight on Twitter.