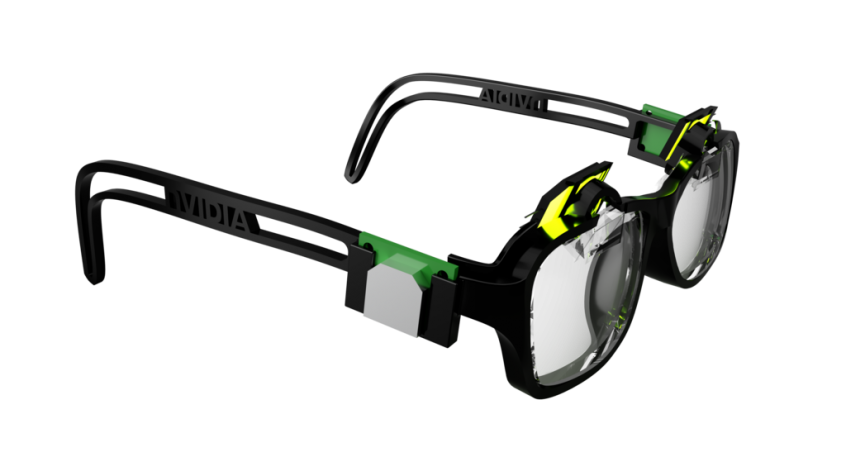 Once again, stakeholders from across the entire computer graphics industry gathered for SIGGRAPH 2019, in Los Angeles, to showcase the latest in rendering and CGI technology.

The show saw announcements from several industry mainstays including Autodesk, who released a new visual programming tool for rendering common dynamic subjects including fiber, particles, and explosions. One of the most compelling outputs from the show, however, was the demonstration of two prototype AR smartglasses from GPU provider Nvidia. The devices showcased very early-stage research from the company exploring potential solutions for delivering high-quality AR graphics to lightweight near-eye displays.

Catering to the high number of glasses-wearers in the global population, Nvidia’s first prototype, called Prescription AR, demonstrated an embedded transparent display within 5mm thick corrective lenses. Researchers from the company indicated that solving issues around the use of prescription eyewear would lower an important accessibility barrier for users with common visual conditions like astigmatism and myopia.

Meanwhile, the Foveated AR Glasses demonstrated a principle which the immersive technology industry has been foregrounding for over a year; the notion of employing foveated rendering to reduce the compute requirements of an AR or VR device without any perceived compromise in quality or detail. By creating a dynamically foveated dual-display system (a concept previously explored by companies like Varjo and Facebook), the device uses an actuator and complex light combiner to move the foveated display to follow the user’s view. The company expects its novel display modality to achieve an effective field of view of around 80 degrees.

Nvidia AR researchers assert that a 400-megapixel resolution is the target threshold to deliver a high-quality AR experience via a near-eye display. To say nothing of the requisite computing power needed to render such imagery in real-time, current projection and microdisplay technologies are incapable of achieving this level of detail within a practical near-eye display. Nvidia’s key business is also front and center even in its scientific demonstrations. The company used this opportunity to illustrate how the techniques harnessed in its proof-of-concept displays magnify the efficacy of the machine learning-driven rendering technology behind many of its core products. The implementation of cutting edge graphics technology like ray-tracing and deep-learning supersampling for head-mounted displays can only help NVIDIA’s core businesses.

While the company’s prototypes may not indicate a significant breakthrough in scalable,  high-quality xR displays, its research further reinforces the work done by other major firms, such as Facebook and Varjo, in the use of foveation to quickly and efficiently reach targets for visual fidelity. xR stakeholders should pay close attention to the engineering breakthroughs emerging from such research. More importantly, however, they should also be aware of the latest determinations on resolution and FOV targets set by researchers, in order to set realistic goals for the development of future AR hardware in terms of power and computing needs.