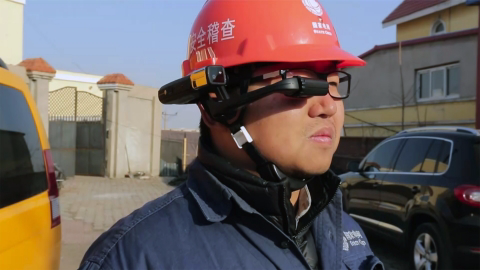 Realwear has established a new partnership in the form of a pilot program with the State Grid Corporation of China, the world’s largest utilities workforce. The pilot involves the deployment of 200 Realwear HMT-1 headsets to maintenance teams in Shanghai performing hazardous “live-line” maintenance tasks, where the risk of arcing and electrocution is significantly high. Leadership from both companies emphasized the focus on safety and hands-free operation as key criteria in selecting HMT-1 devices.

The partnership further reinforces an ongoing trend for clients implementing xR in technical and high-risk frontline work; the effectiveness of an AR device in such scenarios is directly tied to its ability to perform without contributing to a user’s cognitive load. Headsets such as Realwear’s HMT-1 and Google’s Glass Enterprise Edition exemplify the suitability of relatively static HUD-style devices in such situations.  More involved devices such as Microsoft Hololens or Magic Leap One, while feature-rich, necessitate the use of hand gestures, controllers, or at least gaze, which can prove obtrusive and undesirable. Which is not to say these more robust headsets have failed to gain traction within other fields, such as .

Realwear’s pilot serves as a compelling argument for augmented reality as an essential tool for the modern maintenance worker. AR has continually proven it can deliver meaningful ROI in maintenance applications across a variety of enterprise verticals, as evidenced in case studies. From companies such as Coca-Cola and Bosch, as well as energy companies such as State Grid and PG&E, workforce deployments illustrate the versatility of AR deployment across frontline workflows, from onboarding and training to live fieldwork.

AR in the enterprise has long kept ahead of consumer markets in terms of research, development, and deployment, and as such has matured significantly, to the point where ideal form factors and best practices are becoming rapidly well-established. Major players in augmented reality and display technology, such as Kopin, are also embracing monocular, voice-based HUD-style devices for use in industrial settings. However, consumer markets can expect to see similar progress soon as promising startups such as nReal and North, in addition to established hardware providers such as Bose, and platform giants like Facebook. Ensuing competition beginning in the latter half of 2019 and the beginning of 2020 is certain to shed light on the most compelling use cases, applications, and content for personal augmented reality.