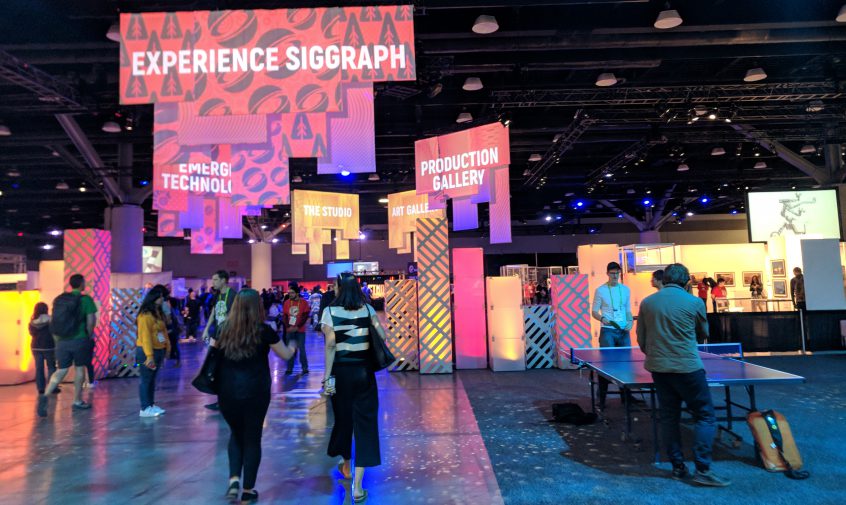 Siggraph marks the most important conference for technical visual artists. Year after year, trends emerge that have significance for the production of media & entertainment for years to come. This year, immersion is on everyone's radar, as VR finally starts to find its footing.

Consumer VR may be years away, but there is more than just belief in immersive entertainment.

The popular reception of VR in 2018 is that the technology is dead, gone the way of 3D television, though VR has only just begun its consumer debut. This pessimism has not affected the entertainment industry, with companies continuing to double down on the immersive space, including the expansion of services and compatibility from Autodesk, The Foundry, and NVIDIA. Motion capture system providers and high-end headset manufacturers have faith in VR’s expansion in the location-based entertainment sector. OptiTrac and Vicon both released specific motion capture sensors specifically for LBE VR operators. StarVR revealed not one but two high-end VR headsets for enterprise and out-of-home markets.

Immersive storytelling is also maturing. Disney premiered the studio’s first VR short, Cycles, at Siggraph. Although the distribution of the short is unsure, the production quality and effort into the film were not short-changed. Cycles was in good company with Baobab Studios’ Crow: The Legend and Fable Studios’ Wolves in the Walls also available for viewing at the conference. All experiences play with viewer interaction, creating a sense of presence and agency for the viewer that isn’t possible in traditional media. These techniques are polished and purposeful, past the experimental stages of previous years. The Experience Hall at Siggraph 2018. (Photo by Alexis Macklin/Greenlight Insights)

The entertainment industry is expanding VR’s role on set.

In a world that is almost entirely created by a computer, VR is becoming a powerful visual tool for actors, directors and visual effects artists alike. Using VR is no longer a tool just for blockbuster directors such as Steven Spielberg and Jon Favreau. There is an increasing amount of directors trying to incorporate VR on set to visualize camera angles and set design.

Bringing VR to visualize scenes is disrupting the current production pipeline. VFX artists need to be involved earlier in the workflow as opposed to putting off involvement until post-production. This can save money as artists have more time to adjust and perfect the director’s vision, leading to amazing visual effects in the final cut.

Use of VR on set will familiarize inexperienced directors and help them to conceptualize VR experiences, as well as create an infrastructure where VR assets are created early on. This could eventually open up VR as a new format to view movies, though the possibility of VR becoming as frequent of a movie format as IMAX 3D is still a very distant future.

Studios of all sizes should adjust and account for cloud workflows.

Another tool that is disrupting video and gaming production is cloud-based tools. Last year, only small studios and independent contractors invested in cloud workflows. This year, there was a significant growth of use and expansion of services. The Foundry introduced Athera early this year, Amazon’s 2017 acquisition of Thinkbox expanded cloud services on the AWS platform, and new products and services from Curo and Autodesk are aiming to streamline production pipelines. Cloud rendering platforms are becoming more mature as well, such as those from Conductor, Thinkbox, Autodesk, and more.

Cloud rendering offers the opportunity to scale based on a project. Using cloud rendering can free up a small studio to work quicker, opening up more demanding bids that were previously impossible. Complimentary, a remote workstation or cloud-based tools can expand the team when the studio needs extra creative-power without compromising security.

The typical production pipeline is requiring a studio to own less hardware, freeing studios to scale based on project and recruit internationally. This will all have a significant impact on immersive entertainment workflows. VR experiences require immense file sizes with exponential growth on the horizon as hardware specs improve. VR is largely coming from young studios that do not have the capacity or funds to grow a local render farm of hundreds of high-powered PCs.

Larger studios are also beginning to employ a hybrid approach for production, expanding rendering capabilities to the cloud to scale, in order to complete massive projects on a tight deadline. Cloud is increasingly used in the production pipeline, cutting render wait times and increasing creative flow in the project.

Client can get the complete presentation of all the trends from Siggraph 2018 in the Siggraph 2018: Flash Note.