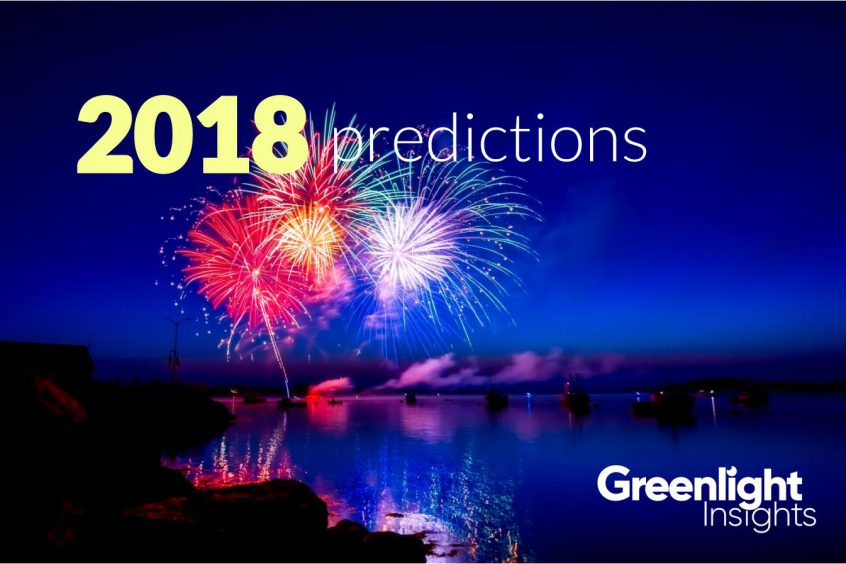 The end of every year is both a time for reflection and an eagerness to see what the next 12 months will bring.

It is fair to say that 2017 was a rollercoaster for most people, with major announcements and events appearing on the radar and then quickly being replaced with something else before we had time to catch our breath. That is especially true in the technology industry which has kept up a fast pace throughout the year, often catching the general public off-guard with new products and experiences.

With that in mind, several analysts at Greenlight Insights pulled out their crystal balls to take a look into what 2018 will bring to the virtual, augmented and mixed reality landscape.

What are going to be the big trends for 2018 and beyond?

Standalone VR headsets are going to have an important impact on the VR industry in terms of consumer adoption next year.

Currently, every headset is dependent on a computing device - whether that is a smartphone, PlayStation 4 or high-powered PC. VR has struggled against both consumer understanding of what the tech can do and the hurdles of setting up the technology. While this is simple for mobile-based headsets, the experience can be a bit disappointing.

Standalone headsets will be more approachable for consumers as they will not have to struggle with setting up the device. This could help that population of consumers that are interested in VR but don't want to spend over $500 decide to purchase a headset. The experiences will not be close to the high-quality and interactivity that the Oculus Rift and HTC Vive can do, but this is just the in-between type of device the consumer market needs right now.

Will a certain category of VR/AR/Mixed/Hyper rise to prominence or shuffle off this virtual coil?

Hyper VR (VR experiences like The Void) will have much more recognition in 2018.

With the opening of the Star Wars VR experiences from The Void in California, Florida, and the U.K., the consumer market is going to be a-buzz with the possibilities of VR. The Ghostbusters experience was well reviewed but doesn't tote the IP prominence of Star Wars. Even with a lukewarm audience (yes, I said that) reception of The Last Jedi, the newest Star Wars film is breaking box office records.

Personally, this is the most excited I have been for a VR experience to open. Besides always wanting to be a Jedi, I can share this experience with my friends and family who are as big fans of Star Wars as I am.

With Zero Latency opening a location in Las Vegas, there will be many opportunities for US consumers to try hyper VR.

Is the mythical killer app nearly here and, if so, what will it be?

I think for VR, it won't be a killer app that propels the technology to mass adoption but platforms.

Currently, VR is largely an entertainment app launcher. Though this is compelling for gamers and will have a large impact on the out of home market, the average consumer needs more utility out of a technology. Once a consumer is able to be both social and productive, VR will take off. Social platforms and productivity platforms like Microsoft Office and Google Office will be imperative to mass adoption.

In a 2017 interview with digital magazine ARC (now the Applause Blog), Clifton said that VR was stuck in a Year One foundational mentality. How near are we to Year Two?

I think we are still a long way from mass adoption and the technology has a long way to go. But this year has been a great year of growth for the industry as VR escapes the trough of disillusionment. Consumers and commercial buyers alike are developing more realistic expectations, which will prep 2018 for an even bigger year of growth. 2018 could indeed be the "year of understanding" as more potential buyers are exposed to VR and what it can do.

"In 2018, we are going to see a lot more HMD bundling (with games / video cards / PCs ). And HMD prices will continue to adjust lower, while quality slightly improves."

"I think the HTC Vive ($599 at time of writing) has a good chance to close the $200 price gap with Oculus ($399 currently). However Vive might be using the higher price point to communicate higher quality to the market, similar to how Apple positions itself versus other phone makers, and as a result, Vive might not be too aggressive in closing the gap."

"I think the killer app will be a social application, particularly one that can be played at home but also at one of the thousands of location-based entertainment venues across China, Japan and Korea."

"We need to see more advancement/iterations on hardware and a bigger content pool."

The Future Is Bright

One aspect to bear in mind is that this crystal ball-gazing has taken place before the annual three days of madness that is the Consumer Electronics Show in Las Vegas, an event that is widely expected to have a plethora of VR and AR products on display. Greenlight will have a team of analysts at CES 2018, and we will be reporting back on what we see as both innovative and relevant.

On a personal level, I have every reason to believe that 2018 will be a relatively good year for the “realities.”

At the end of 2016, I predicted that the next 12 months would see virtual and augmented reality build on the progress they had made that year. As 2017 draws to a close, I believe that the technology has consolidated its place in terms of consumer awareness without pushing on as much in the way that many would have hoped. And I expect this pace of growth to continue through 2018 … unless the mythical killer app suddenly appears, of course!

With that in mind, brand-generated immersive experiences have become more common, and the number of use cases—excluding the ubiquitous games, naturally—have increased. The growth and availability of location-based VR entertainment experiences will make people curious about VR, especially if those experiences are in areas with high foot traffic. On the flip side, content creators should be releasing experiences that have both replayability and IP awareness—the success of the John Wick VR experience does not detract from the fact that the movie franchise it was based on is not as familiar (or popular) as Star Wars, for instance.

The increase in global shipments of HMDs was a key factor in 2017, as was the decision by manufacturers to reduce the price of hardware. Facebook’s Oculus Go headset could be a game changer when it launches, especially as it seems to sit nicely in that price point between high- and low-end devices.

And Microsoft has to decide whether it wants to be in the game at all, even more so now that the Xbox One X console has been released. The HoloLens is an impressive piece of hardware, but it is still very much a work-in-progress, in my humble opinion.

At the same time, the existing players in the space will likely get more aggressive in terms of marketing and increasing consumer awareness. I don’t expect the big box retailers to make the same sort of investment into staging VR experiences as Best Buy did with its Oculus Rift demo stations, but I believe that HMDs will take up a prominent position on the shop floor.

The caveat is that you inevitably get the HMD experience you pay for, which is one reason why VR (and AR, to some extent) developers need to make sure that the content is not installed, played once and then ignored. At the same time, there needs to be a reason to keep putting the headset on, otherwise, there is a chance that the general public will just think “so what” as opposed to “this is the greatest thing since sliced bread.”

And I really hope that there are fewer experiences where you just shoot zombies. But that is probably the one prediction that is not going to happen.

Greenlight's comprehensive research & analytics on the virtual and augmented reality industry is trusted by leading brands across the globe. Read more about the top predictions and trends in the 2017 TrendPack. Alternatively, become a member and get access to exclusive market intelligence.